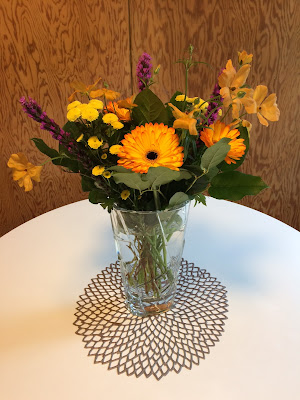 Another timely gift from the universe ... last year chocolates, this year flowers.  A few days ago, while still on vacation, I was notified that I had won a gift certificate for a bouquet from a florist located in Lonsdale Quay.  I have won many, many prizes over the years but never flowers. Knowing that I would be stopping by the Quay on the anniversary of Michael's death to purchase our fajita dinner fixings, I decided I'd pick up the flowers as well, to add a burst of colour to our evening.
So there I was, home from our holiday, admiring all the gorgeous bouquets this morning. Glancing over, I noticed the owner leaning on the counter of her small shop, reading the back of a postcard. I finally chose the bouquet shown above because of the vibrant yellows and oranges, as well as the fact that it included some light orange blossoms that looked airy and delicate, as if they were floating. When I approached her with it, she stopped reading and mentioned that she had just received a beautiful message. I could see that she was moved by it and glancing down, noticed the writer had included a hand drawn heart. I told her I was not in any hurry and suggested she read it aloud if she felt comfortable with that. She did and it was a loving note of gratitude from a young woman who had stopped in a few weeks earlier. The shopkeeper explained that the woman had wanted to purchase one rose.  She went on to say that she had wrapped it up, handed it to her and told her it would be a gift, no charge. The young woman expressed her gratitude and explained it was the six month anniversary of the death of her baby boy.
After listening to the story, I thanked her for sharing and then went on to explain how extremely grateful I was for this bouquet, especially today, because I was marking the anniversary of my son's death. She nodded, then pointed to the light orange blossoms and told me they were called Butterfly Ranunculus.  I had not mentioned my attraction to these flowers but somehow, she knew.  It wasn't lost on me that the analogy of a caterpillar transforming into a butterfly is often referenced in a eulogy. In fact, my long time friend who had written Mike's, included this - "We are like caterpillars who cry over the empty cocoon of their brother. Confused and afraid, they call out his name because they cannot see him in his new magnificence."
A short but deeply moving interaction in a tiny floral shop that lifted my spirits and provided me with another powerful hit of heartfelt connection to my community. Synchronicity at its finest.
www.diaryofanintuitive.com
Posted by Vera at 10:12 PM