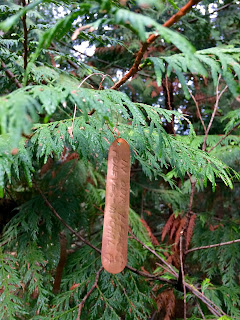 Seated in the living room lounge chair last Saturday morning, with my back to the floor-to-ceiling window, I was rereading notes I had made during the summer of 2015, after meeting up with a young person at their request. This individual had never met Michael but learned about the death of our son through a business connection. They contacted me thinking I might be interested to hear about an experience they had had involving Michael, and of course, I was. During our visit, the person described a vivid dream in which Michael had shared an incredible amount of very accurate information.
The reason I now wanted to refresh my memory about the details the person had relayed to me was because I was planning to stop in at the Orchard Recovery Centre that afternoon. In the dream, Michael had referred to a "cool circle bench in a quiet space on the island" and the individual knew it was a connection to the Orchard. They subsequently found out that names of deceased clients were memorialized there as well. I had never heard of the bench nor the honouring of Orchard participants who had died. Curious to learn more, I had vowed to follow up the next time I visited Bowen Island with a car. Today would be my first visit back to the recovery centre since attending the weekly family education sessions during Michael's six week stay there in the spring of 2010.
Now, after closing my notebook, my husband, who had been looking out the window while sitting on the sofa across from me said that while I had been reading, a hummingbird had approached my back, hovered behind me for a few moments, just over my shoulder, then flown off.  Simply perfect, because midway through those notes were the words, "Nocturnal hummingbirds much louder, bigger and more playful than usual. One hovered and seemed to stare at him for a while. Like a friend of his. Then flew away."
After arriving at the Orchard early Saturday afternoon, I spoke to one of the counsellors who had worked with our family and found out that staff had likely added Michael's name to the memorial garden in 2011, but she strongly encouraged me to create a tag of my own. I was led to the outdoor space, then left there to experience it alone. The circle bench, unlike anything I have ever seen, was indeed located in a quiet space, designed with an elongated, low-angled back rest, allowing one's entire body to relax into it. When seated, one's gaze is drawn upwards, beyond the tops of the towering trees, into the sky beyond. A meditative memorial space in the woods. While writing a short message on the thin copper tag I had been handed, I noticed that there were two stuck together and that the pen was actually pressing the message onto both tags. So, as an added bonus, I was able to take one home, with the same engraved wording that now hangs in a majestic cedar.  A gift to remind me of this deeply meaningful, multi-layered experience of connection to Michael's spirit.

www.diaryofanintuitive.com
Posted by Vera at 8:21 AM No comments: