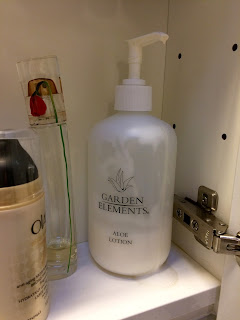 While reaching into the medicine cabinet for my face cream yesterday morning, I noticed that the large container beside it had a puddle of lotion pooled at its base. I did a double take since this pump bottle of aloe lotion is something I have never ever used, lotion no one in this house has ever used. Two-thirds empty and more than five years old, it takes up valuable space in our one and only tiny bathroom. And anyone who knows me well, knows this - I am ruthless when it comes to purging items, a trait that comes in handy when living in a small space. But this, it stays.
I discovered this bottle of lotion in my son's room soon after he and Kelly died. It had obviously been hers. Two years later, there was no question it would make the move here to this home since it was the only personal item of Kelly's that I had.
Now, a puddle. I have seen this happen once before, a year or two ago. Most likely, there is a clear scientific explanation for this, but both times it resulted in a cherished emotional and energetic connection to Kelly. The value of something so seemingly insignificant as an old, no longer in use, bottle of lotion ... precious and priceless.
www.diaryofanintuitive.com
Posted by Vera at 5:31 PM No comments: