What's Up With Jack? 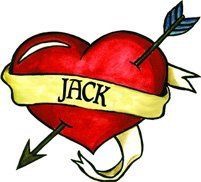 What's up with Jack? Jack was in the title, as well as the main character, of the book my granddaughter was excited to share with me three days ago, the first she's borrowed from her school library. A well written story about a highly creative boy.

Jack is the name of the musician I received an email from yesterday, who heads up a band I love, sharing a link with his fans to a song he wrote after the miscarriage of the child he and his wife had been expecting. Listening to his song, with both head and heart, reminded me of the miscarriage one of my daughters had a few years ago, a soul who had communicated his name to me, Jack, prior to his return to the invisible.

And today, both grooms in the two wedding ceremonies I performed were named Jack. Only one other groom had that name in the other fifty weddings I've officiated this year.

The name Jack means God is gracious. And apparently in the Middle Ages, Jack was a general term for man or boy. I am curious to find out what my repeated experience with this name is meant to show me. With meditation and a desire to understand, I'm hopeful it will soon be revealed.
www.diaryofanintuitive.com
Posted by Vera at 8:32 PM

this is so amazing - and I am certain the answer will become clear soon.