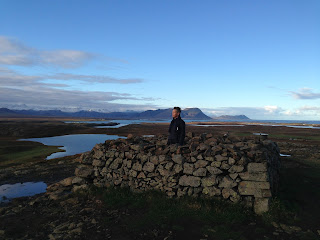 Powerful waterfalls, stark black lava fields, massive glaciers, flora-covered tundra, imposing volcanic mountains, boiling mud-filled cauldrons and dramatic coastlines ... this is Iceland's impressive, and at times surreal, landscape. While circumnavigating this country by car, at almost every turn, we found yet another striking new scene waiting to greet us. So one morning, near the end of our trip, I was surprised to discover that the first recommended stop of the day appeared to be nothing more than a lowly hill.  And as was the case with many other points of interest during our travels, my husband and I had the place to ourselves.
Helgafell (Holy Mountain) was considered highly sacred in heathen times, so sacred that elderly Icelanders would seek out the hill near the time of their death. According to folklore, travellers are granted three wishes when ascending it, but only if they refrain from looking back or speaking on the way. The wishes must be of good intent, should be made while facing east, and not shared with anyone else.
So, beginning at the marked grave of a heroine from an ancient saga, I mindfully followed the winding path to the chapel ruins atop the hill. Standing within that sacred space, sun on my face and faith in my heart, I made my three wishes, feeling deeply connected to all that had come before me. This completely unexpected, short yet powerful, meditative experience upon this humble hill, left quite an impression. And the fact that my mother's name was Helga is sure to help with the odds that my three wishes will come true.
www.diaryofanintuitive.com
Posted by Vera at 1:23 PM